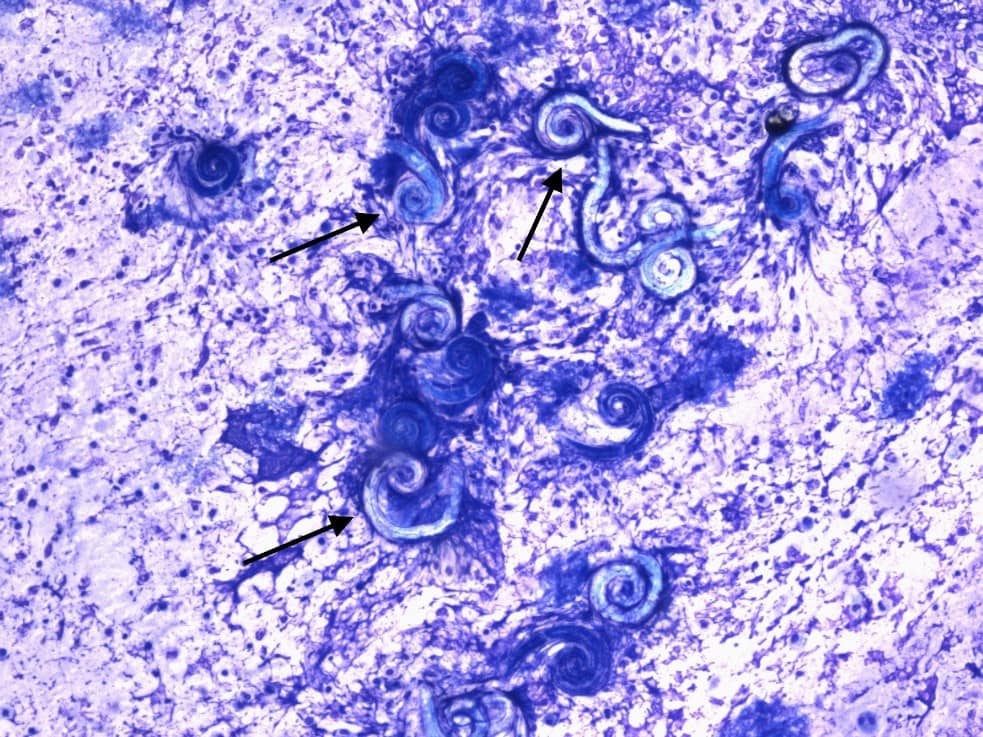 This cytology pictures are from a bronchoalveolar lavage (BAL) from an adult, male dog with history of chronic cough (Wright Giemsa, 10-50x). What is your diagnosis?

Angiostrongylus vasorum (also known as French heartworm) is a nematode found in Europe and parts of North America; it is endemic throughout most of the UK.

Adults are commonly observed in the right side of the heart and pulmonary arteries of dogs. Eggs hatch quickly and first stage larvae migrate through the capillary beds into the bronchioles, bronchi and trachea, causing variable respiratory signs and also bleeding in severe cases. A neutrophilic inflammation is commonly observed in BAL samples from infected dogs, with or without concurrent increase in eosinophils. Peripheral eosinophilia and hypercalcemia, the latter secondary to granulomatous inflammation and likely due to the dysregulation of calcitriol production by activated macrophages, are occasionally seen.

Diagnosis depends on the identification of first-stage larvae in the respiratory tract fluid via BAL or TW (tracheal wash). The Baermann test is typically used to detect larvae in faecal samples. This procedure is considered the gold standard for diagnosis of Angiostrongylus vasorum infection, however, multiple faecal samples should be submitted for analysis, in order to avoid false negative results as excretion of the larvae is intermittent.

Serology testing from serum or plasma is also possible and has a high sensitivity and specificity, when compared with the gold standard Baermann faecal flotation test.  The presence of the antigen in canine blood indicates the animal is actively infected. PCR testing is also available.

Testing for T. foetus is available at Battlab. BattLab also offers a complete service of cytology, serology and PCR testing for other infectious diseases.