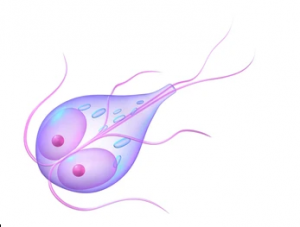 How to diagnose Giardia? Giardia infection is commonly misdiagnosed or underdiagnosed because of non-specific clinical signs (common to many other infectious and non-infectious intestinal disorders), its intermittent shedding and difficulty identifying cysts/trophozoites. Therefore, testing of multiple faecal samples by experienced personnel is recommended, together with general clinical examination of the animal.

The diagnostic tests commonly performed to diagnose Giardiasis are described below and can be used alone or in combination:

While positive Giardia tests results do not prove that diarrhoea was from the infection, most clinicians will treat positive dogs who present with diarrhoea. Treatment options currently available or used historically include metronidazole, tinidazole, ipronidazole, ronidazole, fenbendazole, albendazole, pyrantel/praziquantel/febantel, quinacrine, and furazolidone. Environmental disinfection is also recommended.

BattLab offers a wide selection of tests for the diagnosis of Giardia, ranging from faecal examination, to ELISA testing and PCR.

How to monitor response to treatment? The main aim of treating a symptomatic dog with Giardiasis is to control the clinical signs (diarrhoea) and not necessarily complete elimination of the agent. According to the European Scientific Counsel Companion Animal Parasites, follow up testing should be carried out preferably with direct smear or faecal flotation test, approximately 5 days after treatment ends. ELISA tests may remain positive even after treatment for variable periods of time and should not be used as a guide to determine reinfection or failure of treatment. If the sample remains positive AND if the clinical symptoms persist, treatment should be continued. In those cases, combination therapy with a second drug from an alternate class may also be considered.

In the presence of Giardia cysts should dogs always be treated? Treatment of asymptomatic dogs that shed Giardia cysts and of cats in general has been controversial and may not be recommended in most cases. This because most dogs harbour species-specific types of Giardia duodenalis and are not considered a significant human health risk. However, the presence of zoonotic types in domestic animals and humans in the same household has been described. Other reasons why not treating asymptomatic dogs with Giardia infection include the side effects of the drugs used and the likeness the dog will become reinfected within days. Exceptions, where treatment of asymptomatic infected dogs may be considered include high risk environments like kennels, catteries or with breeders, particularly with a high incidence of diarrhoea in puppies, or where there are small children or immunocompromised humans.